Madan Kamdev can be considered as one of the most beautiful temples ever to built in Assam. Located nearby Guwahati on the north-bank of the Brahmaputra and dedicated to the almighty Lord Shiva, the temple is the largest part of a complex consisting of over twenty temples surrounded by lush greenery and based on top of a hill.

Though the existence of the main temple has been known to the outside world for more than a century, it was only in 1977 when upon clearing the forest area people stumbled upon more than twenty smaller temples made either from stone or brick. Today, only the foundations and the lower portions of these temples survive. Nevertheless, on misty winter mornings, visiting the complex is quite an ethereal experience as the entire area gets covered by fog which eventually settles down in the surrounding forest. The entire area can be said to a hotbed of ancient ruined sculptures, remnants of a golden age long lost to the ravages of time. Historians, based on the design of these sculptures, suggest that they were constructed somewhere between the 11th and 12th centuries AD, possibly by the rulers of the Pala Dynasty.

Since the past few decades, the Archaelogical Survey of India (ASI) has been excavating in the area and have discovered remnants of large water tanks and fortifications; suggesting that Madan-Kamdev would have been an important ancient town. The story of how the main temple got its name is related to the incredible origins of Assam’s most famous temple, the Kamakhya Mandir. It is believed that when Lord Shiva turned Kamdev into ashes for disturbing his meditation, Rati had pleaded for mercy for her husband. The almighty Lord was moved by her grief and instructed Rati to build the famous temple on Nilachal Hill devoted to Sati. Once the task was completed, Shiva gave Kamdev his life back, who in return for his Lord’s kindness, built a holy place dedicated to the powerful god of destruction, which today is known as the Madan-Kamdev Temple.

However, the garbhagriha of the main temple enshrines an idol of Parvati and Shiva (as Uma Maheshwar) holding each other in embrace, spreading a belief among locals that the temple is dedicated to the god of love – Madan Kamdev. Historians believe that the main temple had a pillared gateway, antarala (vestibule), mandapa (assembly hall) and the garbhagriha (holy sanctuary). 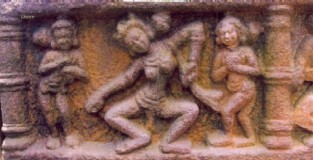 What makes this temple interesting to visit are the sculptures that have been found, so many of them and all unique, sometimes bizarre in identity. With an idyllic backdrop of green hills and rivulets, the sculptures have the ability to drift visitors to a fantasy world consisting of griffins, nymphs, dancing fairies, gods and goddesses in cosmic evolution, walls, pillars, lintels and doorframes decorated with flowers, animals, kalpavriksha (tree of fulfillment), six headed Bhairava, four headed Shiva, demons, serpents and men, women and animal in every conceivable erotic postures, all depicting a variety of themes like processions, musicians, wrestling bouts and erotica.

To end with, I’d like to quote Shri Tarani Kanta Sarma, a remarkable educationist, who said,

“Perhaps there is no place in India except Khajuraho and Konark, where basic weaknesses of mortals caught in fear, doubt, love, jealousy and consummate passion have been so eloquently expressed. It is really a mystery, how Madan-Kamdev a place of exquisite antiquities, so near to Guwahati, escaped the notice of all for such a long time. It is now established that many priceless images of the temple were either stolen by relic hunters or by religion-duped villagers without perhaps realizing the value of the carvings they removed.” – Shri Tarani Kanta Sarma, Remarkable Educationist

iThere are no comments